How to Play Poker at An Online Casino

Poker remains one of the most popular of all card games, whether you play online at a physical casino or at home with friends on a Friday night. The rules of poker came from a combination of many older European games.

However, this card game has always been particularly associated with America. The gambling river-boats that chugged along the Mississippi around the mid-1800s played host to countless games. Poker came over to Europe in around 1870 and grew in popularity from then. And of course, when Las Vegas became a gambling destination, poker was one of the games which became a staple of the city.

These days Texas Hold ‘Em Poker is the most popular variety of the game, starting with its adoption as the featured game of the 1970 World Series of Poker.

Poker received a boost in the 2000s as games started to be televised. The simple trick of allowing the viewers at home to see players’ hold cards from beneath a glass window in the table changed the way people watched the game.

The game truly exploded thanks to the efforts of the appropriately named Chris Moneymaker. He won the World Series of Poker in 2003, but the surge of interest in the game was due to how he got into the competition. Moneymaker qualified as an online player with Pokerstars, which made people around the world think ‘I could do that!’ and start to take up the game.

Poker was dealt a hammer blow in 2006 when the US laws changed to ban payments from financial organisations to and from online gambling sites. However, despite that setback, the game remains hugely popular and has millions of online players from all over the world.

What Kind of Poker is Best?

The question as to how to play poker online can be answered in a couple of different ways. It very much depends on the version of poker that you are interested in playing. Online poker can be generally divided into two varieties: playing against the casino or playing against other players online.

If you choose the second option then you will need to register with a dedicated poker platform. Many of the largest online casinos (like bet365 and William Hill, for example) will have dedicated poker rooms which are separate from their online casinos. Players will be required to download an application to be able to play poker online in these rooms.

Poker platforms often share the same underlying poker network to ensure that there are always lots of players available to play at all times of day and night. Now you can choose your table limits and the type of poker you want to play and can start playing for real money against players from all over the world.

If you want to play poker at an online casino then you will be playing a game which is similar in some ways but very different in others. Online poker at a dedicated poker platform is the same game that you play on Friday night with friends.

The difference is that you pay a ‘rake’ or percentage of the bets to the site for hosting your game. Plus, of course, your opponents are possibly not going to be as friendly as the people you invite over to your home for card night. Otherwise, the game works in the same way, with Texas Hold ‘Em being by far the most popular variation of poker played online.

Playing poker at an online casino is a different game, with the big difference being that the element of bluffing is taken out of the equation. 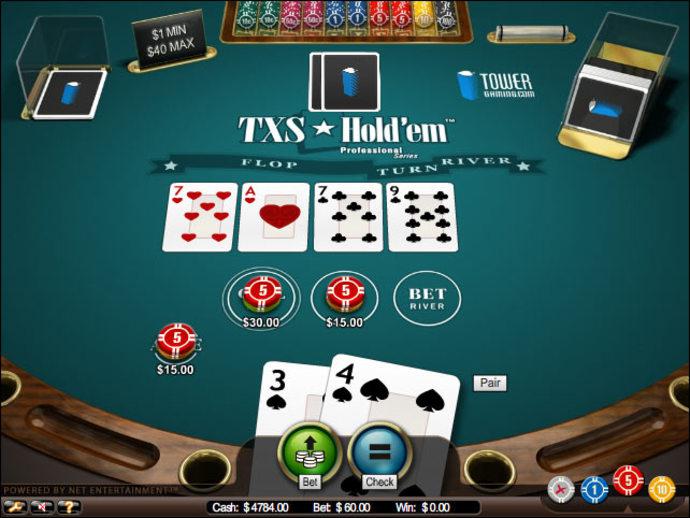 When playing poker at an online casino, you will generally be able to choose one or more of Casino Hold ‘Em Poker; Three Card Poker and Caribbean Stud Poker. Casino Hold ‘Em Poker is probably the most familiar game, as it mimics the regular Texas Hold ‘Em game, except you are just playing against the dealer.

In a standard game, after placing your initial (ante) bet you receive two cards and can see the three ‘flop’ cards and are then given the option to call (for double the price of the ante). The final two cards are dealt face up and you win if you beat the dealer’s hand. Odds paid out for a win vary from evens for a straight or less up to 100 to 1 if you are lucky enough to have a royal flush. Expect a return to player of around 97.8% when playing online Casino Hold ‘Em Poker. 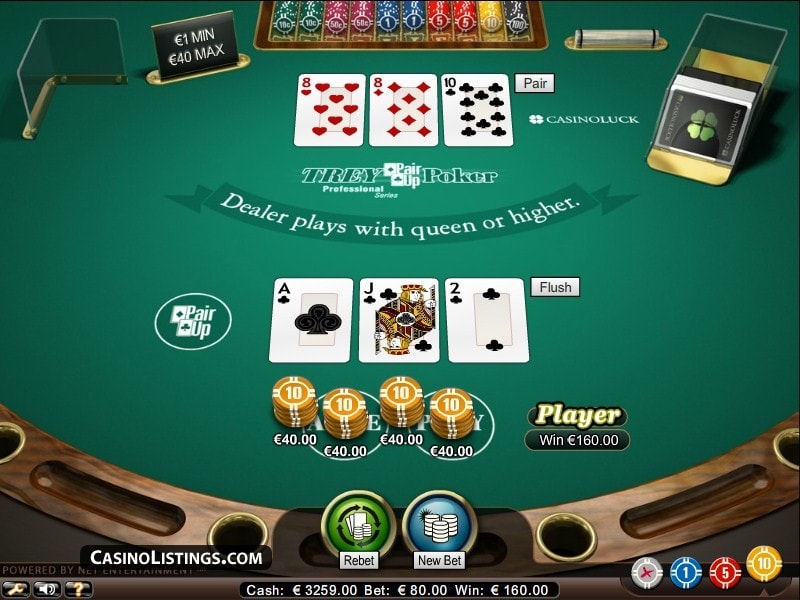 Stud poker is one of the simplest forms of poker, and the online version is very straightforward. Again, you are playing against the dealer and again you must first choose your initial bet or ante amount. You are dealt five cards face up and the dealer has one card face up and four down. You must decide whether to bet double your ante or to fold.

Three card poker is also extremely simple. This time after choosing your ante amount you are dealt three cards face up versus the dealer’s three cards face down. Decide whether to call or not by betting and try to beat the dealer’s hand. If the dealer does not have at least a Queen-high, then their hand does not qualify, and you win automatically.

Three Card Poker gives an average return to player of around 96.5% while Caribbean Stud Poker will have an RTP of about 97.4% if you use optimal strategy.

As you can see, the games of poker that you can play at an online casino are quite simple when compared to the version you can play against other players on a dedicated poker site. There are statistically ‘correct’ ways to play these games which will optimise your chances of winning. For example, the best strategy in Three Card Poker is to bet when you have at least a Q-6-4 in your hand and fold if you have less than this.

A quick search online will enable you to find the best strategy for all of these games, and this will help you to be more successful so is highly recommended. As the saying goes: ‘Fail to Prepare and Prepare to Fail’!